Offensive by Eritrean Peoples Liberation Front forces to liberate Massawa, Eritrea, to cut off the supply route to Asmara, facing the entrenched Ethiopian army and its naval force. 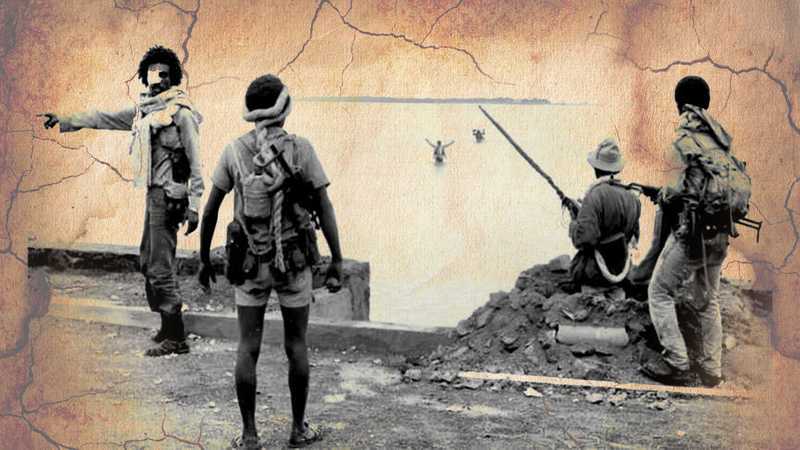 E.P.L.F. fighters look out to sea as Ethiopian soldiers surrender

After the annihilation of the Nadew Command at Afabet, E.P.L.A. (the army wing of the E.P.L.F.) was at a military advantage. Morale was high among the fighters and the army was much better equipped thanks to all the weaponry that was captured at Afabet.

Beginning on February 8, 1990 the EPLF forces began the offensive by cutting of the critical supply route from the Asmara garrison. The surprise attack stunned the Ethiopian military and by the following afternoon the EPLF forces were in the suburbs of Massawa. On the third day of the offensive, February 11, 1990, the Eritrean forces captured the Ethiopian naval base near the town. The only remaining portion of the city to rid of Ethiopian troops were the islands.

To achieve this the Eritrean forces used their nascent naval forces (mostly small gunboats) to attack from the sea during an artillery barrage. Using this artillery fire the Eritrean armor moved onto the causeways that connected the islands with the mainland. The first of these tanks were destroyed by the Ethiopian garrison, however, they were eventually overcome by the EPLF. After this defeat the remainder of the Ethiopian forces retreated to Ghinda.

Even after the loss of Massawa, the Ethiopians continued their aerial bombardment of the city. The civilian population was hardest hit as the EPLF forces had followed the Ethiopian troops to Ghinda. Notable of this bombardment was that napalm and cluster bombs were used.