After a 3-month preparation, the Ethiopian government launched its 2nd military offensive to encircle and annihilate EPLF in central highlands of Eritrea, forcing EPLF to withdraw towards Sahel after fierce battles at Adi Yakob, Elabered and Ma'midè. 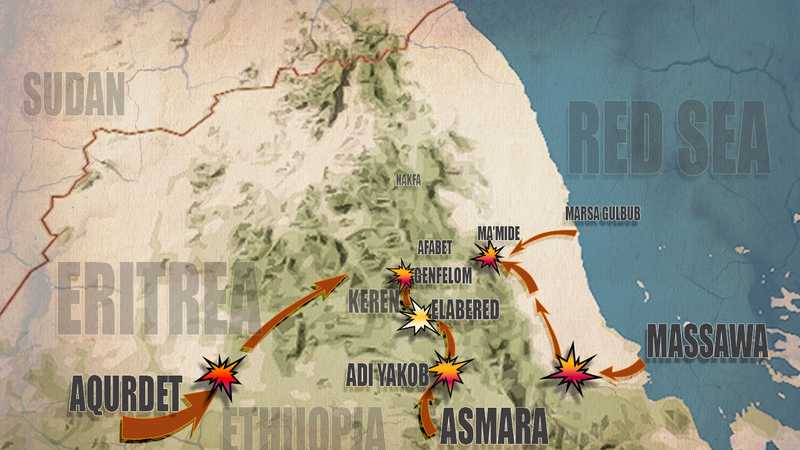 The second offensive was a three-pronged attack that started in Massawa, followed by Aqurdet and finally from Asmara. The Ethiopian army was well prepared. At the same time, EPLF had established defensive positions at Adi Yakob, north west of Asmara, the capital of Eritrea (province of Ethiopia at the time). EPLF also had Keren, 100km north of Asmara, as its central hub at the time. This offensive targeted these positions while closing the circle on EPLF from the northeast, via the coastal flatlands of northern Red Sea.

The first attack in the east came from the port city of Massawa. It directly followed the Massawa-Asmara road and split northward at the foot of the eastern escarpment of the Great Rift Valley towards Emberemi. The objective was to stretch EPLF forces thin and pierce into the city of Afabet. It used the unprotected northeast coastal plains to swiftly move its forces though Fgret, Mai Awald, She’ib and also landed additional force at Marsa Gulbub on the Red Sea coast.

In the west, the attack set out from Aqurdet and attacked EPLF positions at Engerne, moving in the direction of Keren. It pushed EPLF into the open plains on the way to Keren where the Ethiopian army had clear superiority because of its mechanized regiments. At Begu, EPLF tried to stop the enemy progress but quickly decided sustained defense at this position could prove costly. Realizing that the push was towards Keren, EPLF decided to withdraw and establish defensive positions in the area around Keren. Eventually, even Keren was not sustainable as an option. So Genfolom, north of Keren, became EPLF’s place of choice to regroup and halt the attack. 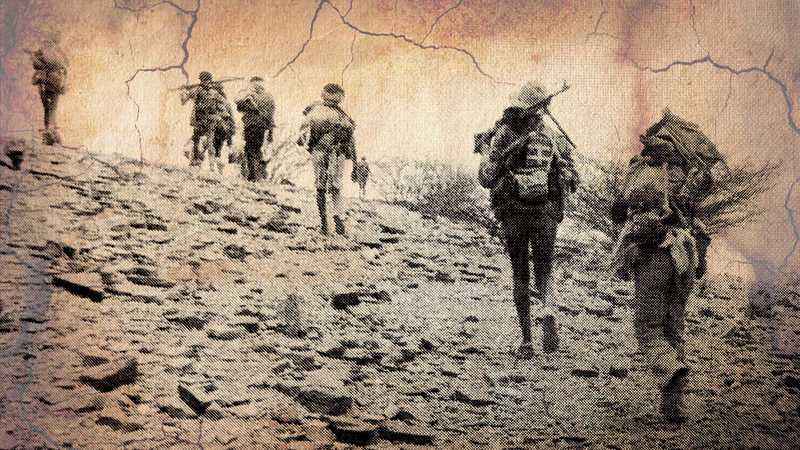 Tegadelti marching up a hill in battle

On November 21st, the heaviest of the attacks started on the central prong that attacked Adi Yakob launching from Asmara. The plan was to carry out a sustained and overwhelming artillery barrage at Adi Yakob followed by a blitz of tanks at a specific point. The tank-raid ploughed through trenches with many tegadelti ending up buried alive while bravely holding their defensive positions. Adi Yakob fell.

With the overall development on all fronts, EPLF decided to withdraw while cutting loses and making calculated stands at certain key areas. To many EPLF tegadelti’s surprise, at Elabered, a large Ethiopian army convoy recklessly came rushing through the narrow pass on the Asmara-Keren road. It was led by a long column of tanks. This was the regiment that had destroyed the Adi Yakob EPLF defenses.

On November 25 1978, at the Battle of Elabered, as it has become to be known, EPLF fighters scrambled and launched a counter attack catching the Ethiopians by surprise. The whole convoy was stuck on the pass and the rest of it snaking back on the narrow road leaving it exposed to artillery from its left side while being pinned against a hill on the right. Quickly, it turned into hand-to-hand combat, some tegadelti scaling enemy tanks and dropping grenades into them. 13 tanks were destroyed while several others captured. A huge cache of ammunition was taken.

The Ethiopian force that moved on the eastern coastal plains rushed to get to Afabet from the east with additional force that landed at Marsa Gulbub. A race ensued on the EPLF side to stop this force at Ma’mide before it reached Afabet. If Afabet fell, it would mean the encircling was complete and the escape route would be shut. However, the Ethiopian force, especially its infantry units, were already weakened having trekked through the sun-scorched barren desert. EPLF fighters, although they also suffered badly, took advantage of the enemy’s misfortune and defended successfully. Regrouping, they carried out a counter offensive and stopped the Ethiopians completely.

With these developments, EPLF pulled back from most of its occupied territories including Keren and started to weigh in on its options for the future. The province of Sahel, especially its rugged mountainous area further up north, seemed to be the logical choice to become its base where it would take its defensive stance against all future Ethiopian military campaigns and from where it would launch all its future counter-offensives.